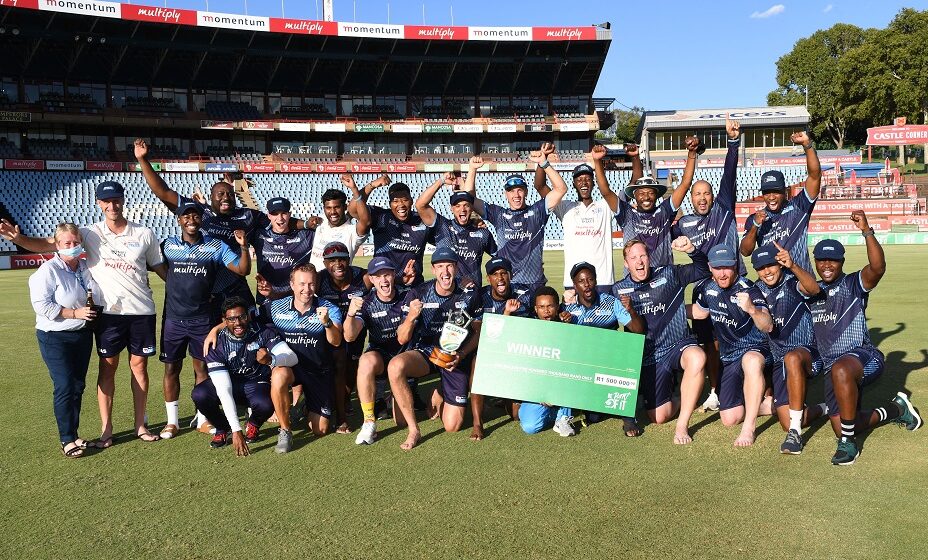 The Momentum Multiply Titans are four-day champions of domestic cricket once more, after a tense seven-wicket win over the Lions.

“This is why we play!,” coach Mandla Mashimbyi exclaimed after the Sky Blues held their nerve against their neighbours.

“There were a lot of nerves in the build-up, but you want to always be in the fight for trophies. That’s why guys come to play for the Titans.”

The win saw them hold off the Warriors, and also put to bed the disappointment of missing out on the T20 title, after losing to the Rocks a week ago.

“The character the boys showed was just incredible. Theunis de Bruyn has come back from a big injury, and his century in the first innings showed his class,” Mashimbyi continued.

He also had a word for the mercurial Simon Harmer, who took six wickets in the Lions second innings, to keep the target under control.

“We knew when ‘Harmy’ came in that he was world-class. He has taken so many key wickets for us throughout the campaign, and it was great to see him have a big say in this decisive fixture.”

There were contributions throughout the season for the Titans, and they will be especially thrilled to start the new era of South African domestic cricket by capturing the biggest trophy on offer.

For Titans Cricket CEO Dr Jacques Faul, the win was testimony to a lot of work behind the scenes.

“Nothing was easy for these players, and they should be especially proud of this performance. There were changes to schedules, formats and traveling. And they have kept adapting, and fighting. They should be very proud of this victory,” Dr Faul added.

As the Titans broke into team song to celebrate the victory, it was clear just how much the red-ball trophy means in South African cricket.

“We have to take our hats off to the Warriors. They have played some great cricket, and we know what it feels like to get that close and come short. We know they will come back stronger, and we look forward to that challenge,” Mashimbyi added.